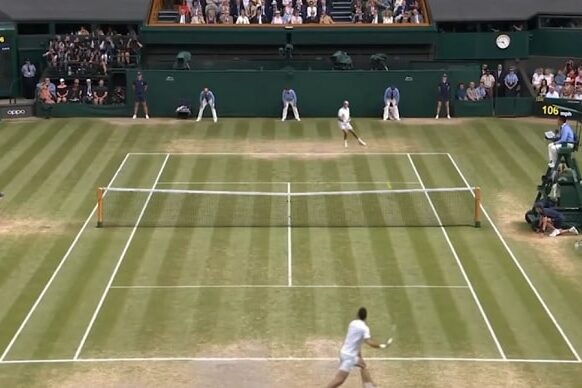 There seem to be a lot of technologies recently to create new motions by extracting motion from human motion. (vid2vid, vid2game, pose2pose)

Vid2Player, which was researched at Stanford University, uses actual tennis rally video data to create the position and motion of the tennis players to strike the ball according to the position of the ball.

They used CycleGAN for image-to-image translation to pre-process the structure of a tennis rally, such as'motion-hitting the ball-returning', and pre-processing shadows or cutouts in the data.

The source code is not public yet, but you can see interesting demo results such as Federer and Federer rally on the project site.

Vid2Player
We present a system that converts annotated broadcast video of tennis matches into interactively controllable video sprites that behave and appear like professional tennis players. Our approach is based on controllable video textures, and utilizes domain knowledge of the cyclic structure of tennis r…
Category: VisualOctober 16, 2020216 Views
Tags: vid2playerpose detection
Share This Article
Share on FacebookShare on Facebook TweetShare on Twitter Pin itShare on Pinterest Share on LinkedInShare on LinkedIn

JALI's face animation technology used in CYBERPUNK 2077
December 2, 2020
Weekly Popular
Most Liked
Go to Top
Subscribe to our newsletter
Every week, various AI-related trends, research results, and Smilegate.AI employment information are shared.
You can cancel your subscription at any time.