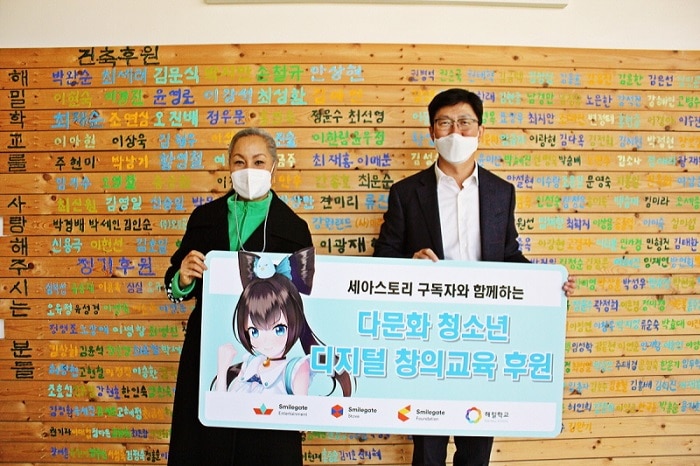 A message of hope from SeAH Story... Delivered a total of 30 million won, including 24-hour donation concerts
Hope Studio leads the culture of'joyful donation' with game users and viewers of internet broadcasting

[2021-0322] Smilegate Hope Studio (Chairman Hyukbin Kwon, hereinafter Hope Studio) visited Haemil School (Chairman Kim In-soon) in Hongcheon, Gangwon-do, and visited the 24-hour donation concert held at SeAH Story at the end of last year and Smilegate Stove through some affiliates. It was announced on Monday, 22nd that the donation that was raised has been delivered.

The donation that Hope Studio gave to Haemil School reached a total of 30 million won by adding donations from viewers and sponsorships from Smilegate Stove Indie in addition to the donation from the virtual creator SeAH's 24-hour donation concert held at the end of last year. . This donation will be used to support the IT education infrastructure of Haemil School students and improve the educational environment.

Hope Studio is carrying out various support projects so that children and adolescents who will make a difference tomorrow can discover and achieve their dreams and possibilities. In particular, we have been striving to create a donation culture in which viewers of Internet broadcasts such as'SeAH Story' and games served by the Smilegate group can share their enjoyment.

Smilegate CEO Yang Dong-gi said, “Hope Studio has been providing support for multicultural children, including global schools, and has been striving to ensure that children are respected for diversity and that everyone can pursue happiness.” “The value pursued by Haemil School is also hopeful. Since it is not different from the studio, I was willing to make this donation. In the future, I will try to find ways to work with society.”

Chairman Kim In-soon of Haemil School said, “With this support, it will be a great help to improve the infrastructure and educational environment for the current students.” “In the future, children from multicultural families such as Haemil School students will raise their dreams. I will do my best to grow into a healthy member of society with interest.”

On the other hand, Hope Studio has been sponsoring global schools to foster multicultural talent since 2014, and through the creative community activity'palette', various possibilities for local children's centers and disadvantaged children can be found together with college students' creative mentors. We continue to support the creation of a creative learning environment that can be expressed.

버추얼 아티스트 한유아에 대한 모든 것, A to Z
2022년 May 9일
Weekly Popular
Most Liked
Go to Top
Subscribe to our newsletter
Every week, various AI-related trends, research results, and Smilegate.AI employment information are shared.
You can cancel your subscription at any time.