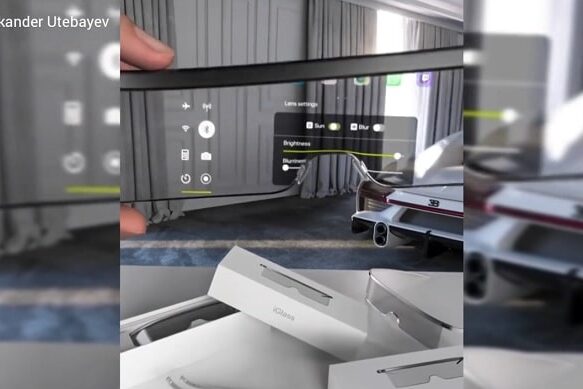 This is an AR Glass concept video created by a designer named Iskander Utebayev. Even if it is a concept video, it is quite fancy and once implemented, I think there is a potential to significantly change the Human-Machine Interface that uses smart devices.

One of the things attracting attention as a device to which AI technology will be applied is the AI Speaker. Currently, it only provides limited functions, but is expected to serve as an AI gateway in the future. However, personally, I think that listening to the information provided by AI Speaker in the form of voice is limited in terms of efficiency, and in the end, I think it should have a function to show information. However, I think that attaching a display to an AI speaker that is based on use from a distance is a bit ridiculous, and in the end, it is necessary to utilize an external display such as a TV or implement a more efficient self-visualization method. For example, consider a hologram-like shape that is not limited by the size of its own device.

AR Glass is not only able to provide all the functions provided by the current AI Speaker, but also free from visualization problems, I think it is possible to compete with AI Speaker in the future. However, there is the inconvenience of wearing something, so the probability of surviving both devices cannot be ruled out.

Among the various elements required for implementation, the display seems to be somehow, but the problem is how to implement the interaction with AR Objects floating on the screen. As those of you who have played VR games know, the controller is not intuitive, and it is not as efficient as touching a smartphone by hand or using a keyboard and mouse combination. In order to do something in a virtual space, you have to respond not only to the "eye", but to the "hand", and I think that this part also requires ideas and technological innovation.

Personally, I like open world RPGs like Skyrim, and I've been playing for quite some time, but in Skyrim VR, when you swing a sword or shoot a bow, you have to use your two hands to really swing and hold a bow to pull a protest. It seems plausible, but it is difficult to control precisely and the feeling of operation is a little futile as the parts such as hitting feeling are not considered. ^^ It is quite difficult and unnatural to select a dialog or press a menu.

There seems to be a number of attempts, such as introducing haptics when a weapon touches a monster, or introducing a specific motion (like black and white) or voice commands instead of hotkeys for complex magic. Reality is not only the visual element, but also the visual, auditory, tactile, and interactive parts.