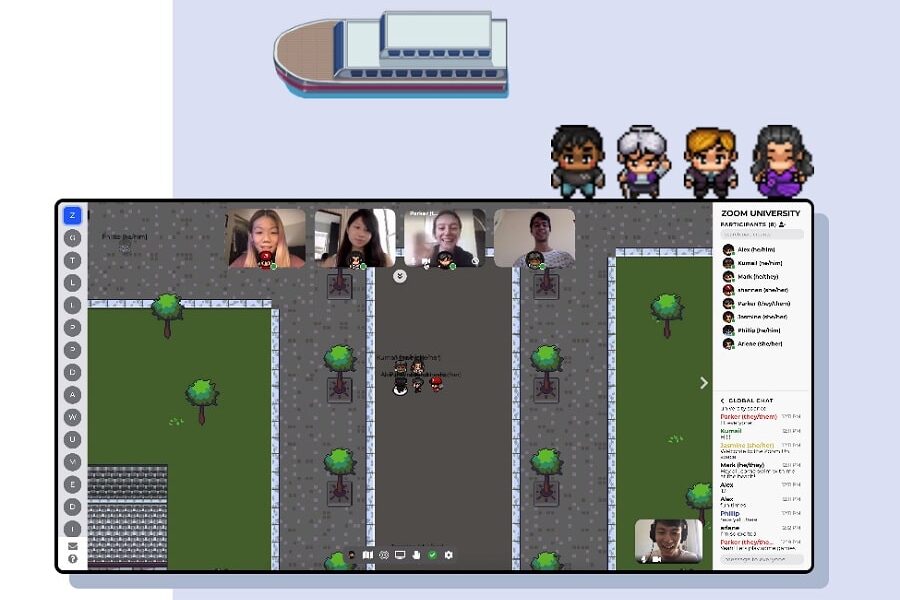 Gather Town is a kind of video meeting solution such as Zoom or Teams, but it is characterized by actively introducing virtual space and avatars. For example, we create a virtual space called “Office”, and each participant is given a unique avatar and “place” within the virtual space. Avatar is portable, and is a way to access other avatars so that you can have a video meeting with that person. In this way, 1-to-1 video meetings as well as N-to-N video meetings are naturally possible.

Video meeting itself is a video streaming technology characterized by low latency, and the differentiated point is image quality. However, Zoom and Teams have put a great deal of effort into simple access, especially Teams, adding a Together mode to reduce visual fatigue. In the case of Gather Town, I think that the user experience is greatly improved by interpreting the concept of “connection” in a way similar to the real world, beyond simple access.

In Gather Town, you can edit any virtual space, and some presets such as University, Office, Conference, and Social are provided by default. For example, in the University virtual space, there are separate campuses, classrooms, and faculty rooms, so you can start a video meeting by visiting each branch:

In the case of Office, each desk and conference room are made up, so you can create a user experience similar to working in the office while working from home without face to face. As it is a non-face-to-face era caused by Corona 19, there are advantages and disadvantages, but it felt very novel:

The non-face-to-face era suddenly came due to Corona 19, and as a result, many activities in the real world have moved online. There is also a clear advantage of being online, such as allowing a large number of participants, but the offline experience is not entirely possible online. Therefore, we believe that technologies and user interfaces that can be implemented online but simulate the offline experience as much as possible are attracting attention.

Currently, most of these technologies can be seen in the framework of virtual space and interaction implementation, which is also a very familiar paradigm in the field of games. In fact, if you look at the example above, it's reminiscent of a very old game screen. I would like to think about what if various realism enhancement technologies already applied in the latest games (3D engine, physics engine, light engine, AR, VR, ray tracing, stereophonic sound, various manipulation methods, etc.) are applied. Gather
Gather is a video-calling space that lets multiple people hold separate conversations in parallel, walking in and out of those conversations just as easily as they would in real life.
Categories: Interaction, TrendDecember 15, 202011,921 Views
Tags: featuredvideo conferencinggather town
Share This Article
Share on FacebookShare on Facebook TweetShare on Twitter Pin itShare on Pinterest Share on LinkedInShare on LinkedIn

Semantic Segmentation
2021년 December 12일
Weekly Popular
Most Liked
Go to Top
Subscribe to our newsletter
Every week, various AI-related trends, research results, and Smilegate.AI employment information are shared.
You can cancel your subscription at any time.